My practice explores ways in which nature is framed by man-made geometries, in particular by modern and contemporary glass architecture. I am interested in the layering of nature and technology in the built environment-the lines and grids imposed upon the natural world in attempts to contain, order or define it.
The work explores the perceptual moment and the act of view finding-through the camera lens and through architectural apertures. I am fascinated by the potential of glass, in optics and in architecture, to magnify and to telescope, to distort, reflect and transmit.
My background in experimental animation informs my studio process, which often involves sequential or time-lapse photography and frame-by-frame manipulation of film and video images. I arrange works in diptychs, triptychs or series, looking for association, rhythm and meaning across and between frames. Using collage and projection techniques I construct layered compositions in 2 and 3 dimensions that conflate or invert real and illusory, interior and exterior space.
Glass house(2016) develops an ongoing body of work concerned with the heterotopian spaces of gardens and the use, or fantasised application, of glass in architectural theory and practice.

What is your earliest memory of art?
Drawing lessons with my grandfather at the kitchen table.
Have you shown your work in a non-white cube space before?
I've shown in a variety of non-traditional spaces including a nineteenth century Baptist church, a poetry library, a synagogue, a shop window, underground railway arches, a former municipal swimming pool and on-line spaces. I've also made a permanent artwork for an Art Deco hotel.
What does this sort of space bring to your work?
In many of these cases the pieces were site-specific, so the social, architectural or environmental contexts directly informed the development and installation of the work. I find it interesting when a work conceived for one type of space is then shown in another-the new meanings and associations the work can take on and the different dialogues this can prompt. I'm thinking in particular of my 2010 project Pattern Completion which was first exhibited at Gimpel Fils in Mayfair and then in the Wilkins North Observatory at UCL, an intimate, octagonal astronomy shed.
What was your first experience of King's Cross?
As a wide eyed teenager in the late 90's. It was a very different place back then!
What was the last exhibition you visited that unnerved you?
The last work I saw that unnerved me was the film The Lobster directed by Yorgos Lanthimos. It has the violence, humour and nightmarish surrealism of a Svankmajer animation.
Who have been your main influences over the years, both in historical and recent terms?
Recently I've been looking at the work of late twentieth century architects and urban planners including Cedric Price, Frei Otto and Zvi Hecker; to Bruno Taut and the Crystal Chain; and to contemporary artists Niamh O'Malley, Jessica Warboys and Ellard and Johnstone for the ways they explore relationships between film and glass; object and landscape. I studied Animation at Art school and discovering the experimental films of artists such as Patrick Bokanowski, Sarah Pucill, Chris Welsby and Inger Lise Hansen had a big influence on the development of my practice. 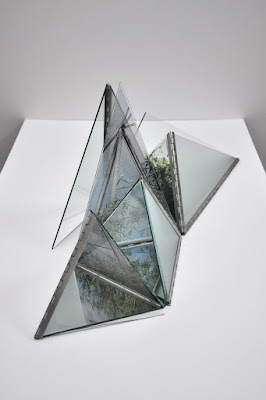