In its current state, the‘ruins’ of 26 Caledonian Road may also be seen as palimpsest architecture
(a palimpsest being writing material where the original script has been partially removed so it can be re-used for the new text). In the shop, with most of the personal possessions and shop produce of the previous owners now removed, what remains is the fabric of the rooms and a strong sense of presence, on to which are now being added many new and individual layers of interpretation.
Caroline's work in this context is a response to the sense of the shop - how it feels on entering the space, sensing the height, the width, and the natural pathway through the space. It explores how form develops within a given space and time, and the impact of that form and space it occupies. By physically connecting with the furthest recesses of the room, it brings them closer to the viewer, allowing a mental measurement of the space and structure, creating a connection and intimacy.

Have you shown your work in a non-white cube space before?
I've shown work in both white cube and non-white cube spaces and like the contrast. The first generally acts as a frame, focusing on it, as an object. The second integrates the form and space, starting a dialogue and feedback process.
What does this sort of space bring to your work? And does the environment in which you exhibit your work change how your work is perceived?
Context is key. My work responds initially to the physical presence of a space, white cube or not, and develops through feedbeack between the growing form and the space it occupies. Here I will be developing work on the countertop in the shop environment, both of which have a strong sense of function, past and present. It will be interesting to discover if this sense of function - and the natural response of the customer in all of us - will have an impact on the work.
What is the future for art?
Hopefully as a widely accepted language, both multi-form and multi-disciplinary, with which to explore and communicate complex ideas. But that's quite a long discussion....! 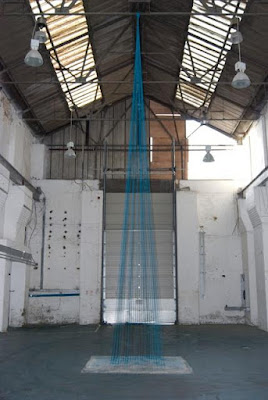 Lambard trained as a designer but soon realized that my interest lay more in observing how the form was developing than in the final object. Lambard  now makes  large scale installations using everyday materials which allow both myself and the audience to experience processes of development of structure and form within a given space and time. It also reflects on the impact the developing form has on the space it occupies. Caroline has developed a construction process which uses lines in space, so three dimensional form to be viewed and experienced from both inside and out. The use of thin lines of thread mean the forms are able to span large spaces as well as developing areas of complexity and entity. The installations have led to many conversations with practitioners from other disciplines – such as science, architecture, economics and other artists - who see reflections of their own ideas in the structures. As a result of this experience, since 2011 Lambard has set up and has  run, along with other artists, the talks organization Ideas-matter-sphere which brings together speakers from many backgrounds to share and discuss ideas with equally multi-disciplinary audiences.